Nothing could say Christmas more than the Bach Magnificat combined with a selection of carols.  Phoenix Choir was joined by professional soloists, trumpet, organ and the Kanimbla String Quartet for its Christmas concert on 10 December 2022.

said Phoenix Choir musical director, Amy Moore, who used her contacts in the Song Company to secure some rising stars. Soprano, Maia Andrews; Contralto, Olivia Payne; Tenor, Elias Wilson; and Bass, Andrew O’Connor are young conservatorium graduates with a few years of experience developing their singing careers in opera, concert performance and vocal ensembles. They sing the delicate solo and duet numbers which intersperse the choruses in the Bach Magnificat and they will also add to the fun for some of the carols.

Trumpeters are much in demand in December because, after all, it wouldn’t be a proper Christmas concert without a trumpeter.  So Phoenix are delighted that Baroque trumpeter Simon Wolnizer joined the chorus to bring drama to the big moments. 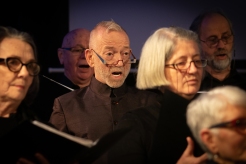 The Magnificat deserves its popularity, showing J.S. Bach at his most splendid and ornate in half an hour of joyous Christmas celebration. The choir worked hard to master Bach’s intricate writing. Amy also gathered a selection of carols old and new from around the world so there were a few surprises to contrast with the heartwarmingly familiar. The trumpet came in handy for the descant of the traditional carols, including some for the audience to sing along with the choir and ensemble

Bach set the Latin text of the Magnificat in twelve movements for five choral voice parts with soloists and orchestra. It was performed at Christmas with festive hymns interpolated through the work. Ten years later, in 1733, Bach composed a slightly altered version, with the hymns removed and the key changed to D Major – a better key for trumpets – for the Feast of Visitation. It is this D major version version that was performed, in a marvelous arrangement by Tim Kaye for slightly smaller instrumental forces. Tim’s arrangement loses none of the thrilling energy of the original, with the overlapping fugues, rich harmonies and beautiful solo movements.

Phoenix Choir performed the Bach Magnificat and carols from around the world at 3pm on Saturday 10 December in the Phillips Hall, Gardiner Crescent, Blackheath.

Sadly there were no photos for this concert as Carolyn Hide was unexpectedly called away at short notice.  The photos above are from the August 2022 Blackheath Choir Festival.  Carolyn as usual designed all the lovely artwork for the concert.