Phoenix Choir continued to explore major works of the classical canon with performances of Schubert’s Mass No 2 in G major. Following the approach of our acclaimed Faure Requiem in 2014 the choir was augmented with guest singers, and supported by the Phoenix Strings and professional soloists.

The concerts featured music spanning the entire Classical period from an early work of Italian composer Luigi Boccherini through a selection of works spanning Mozart’s entire career. Written in 1765, Boccherini’s Kyrie in B flat major displays the nascent Classical style and included a tuneful bass solo by Tristan Entwhistle. The glorious Laudate Dominum by Mozart shows the high point of Classicism, and was sung by local soprano Michelle Foreman. Schubert’s Mass is one of his most enduring early works and combines mature classical form with many of the hallmarks of the early Romantic period.

Musical Director, Rowen Fox, said “What fascinates me about this program is the young age at which many of these works were written”. Boccherini was 22 and at an early stage of his stylistic development when he wrote the Kyrie. In contrast, Schubert’s Mass, produced when he was only 18, shows remarkable development and is a mature work written in one of his most prolific periods. However the prize must go to a nine-year-old Mozart for his Conservati Fedele, a delightful solo sung by acclaimed tenor, David Hamilton. 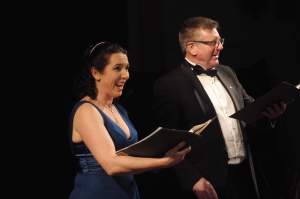 Phoenix Choir was delighted to perform in the Phillips Hall in Blackheath on Friday 21 August, marking the date of the Blackheath Choir Festival. This continues the choral tradition for the dedicated Blackheath audience, awaiting the return of the festival in 2016. In keeping with the tradition of the Choir Festival, the 7 pm concert was professionally staged and lit, and mulled wine was served.

A second performance was held at one of our favourite venues – St Hilda’s Anglican Church in Katoomba – on Saturday 22 August at 4pm.