Phoenix Choir staged a full performance of Handel’s Messiah on Palm Sunday 9 April. In the tradition of Messiah we assembled a large choir and performed with chamber orchestra and professional soloists.  Messiah Program click here

This year we welcomed back special guests Blackheath Public School senior choir, led by Jenny Lanyon, to join in a program featuring the Christmas music from Handel’s Messiah and a variety of other pieces to celebrate the season.

Musical DirectorRowen Fox, is preparing Phoenix Choir for a full Messiah performance on Palm Sunday 2017. As part of this preparation, our Christmas concert presented the portion of the work that focuses on the prophecy of Christ’s coming and His birth, featuring such well-known choruses as For Unto Us a Child is Born, Glory to God and His Yoke is Easy. Local mezzo-soprano Lyn Phillips and Sydney-based soprano Julie Paik performed some of Handel’s beloved arias, including He Shall Feed His Flock and Rejoice Greatly. The children’s choir will joined Phoenix in And the Glory of the Lord and, as a rousing finale, the Hallelujah chorus.

Another concert highlight was a smaller chamber choir performing contemporary Christmas music from the English choral tradition. The program also included old favourites such as O Holy Night, with a solo from Lee Louise, A Blessing, sung by the children’s choir, and some familiar Christmas carols for everyone to join in.

The final chorus earned a standing ovation from the audience in Blackheath.  Click this link below to see the finale

Phoenix Choir opened the Blackheath Choir Festival.  As usual we provided a large portion of the volunteer force to support the Festival.

Durante’s Magnificat, often attributed to his famous student Pergolesi, had an elegant simplicity which contrasted with the rich melodic and harmonic beauty of Vivaldi’s Magnificat. Canon Fodder sang the solos in these works and also performed three pieces on their own, by Palestrina, Marenzio and Pergolesi. To start the concert all joined together for the majestic Lauda Jerusalem by Vivaldi, where they captured the grandeur of the original setting fo

Phoenix Choir is developing a reputation for adding a special touch to their performances. For the 2015 festive season their Christmas concerts in Leura and Lithgow continued this tradition with the return of audience-favourite guest baritone soloist, Tristan Entwistle and trumpet soloist, Emma Bolton.

Musical Director, Rowen Fox, built a program around the exquisite Vaughan Williams Fantasia on Christmas Carols. This popular work is a medley of English folk carols which Vaughan Williams collected from country communities, rescuing them before they died away. The melodies of each carol weave back and forth in a conversation between the Baritone soloist and choir, from his opening solo, reminiscent of a wintry English landscape, to the full-throated climax with the choir wishing you all a Happy New Year,

Trumpeter, Emma Bolton joined the choir in a performance which began with the rousing Christians, be Joyful, from J S Bach’s famous Christmas Oratorio. Emma also added magic to a selection of much-loved traditional carols, which are interspersed through the program, and the audience are invited to sing along with the most popular numbers.

Tim Kaye added the power of the organ with a dramatic opening of Bach’s Chorale Prelude In Dulci Jubilo (BWV 729) and to the traditional audience carols.

No Phoenix Choir Christmas concert would be complete without selections from Handel’s Messiah. Tristan and Emma joined to perform the stirring and virtuosic The Trumpet Shall Sound and the Halleluiah Chorus provided a rousing finale.

The concerts featured music spanning the entire Classical period from an early work of Italian composer Luigi Boccherini through a selection of works spanning Mozart’s entire career. Written in 1765, Boccherini’s Kyrie in B flat major displays the nascent Classical style and included a tuneful bass solo by Tristan Entwhistle. The glorious Laudate Dominum by Mozart shows the high point of Classicism, and was sung by local soprano Michelle Foreman. Schubert’s Mass is one of his most enduring early works and combines mature classical form with many of the hallmarks of the early Romantic period.

Musical Director, Rowen Fox, said “What fascinates me about this program is the young age at which many of these works were written”. Boccherini was 22 and at an early stage of his stylistic development when he wrote the Kyrie. In contrast, Schubert’s Mass, produced when he was only 18, shows remarkable development and is a mature work written in one of his most prolific periods. However the prize must go to a nine-year-old Mozart for his Conservati Fedele, a delightful solo sung by acclaimed tenor, David Hamilton.

Three Choirs and a Quiz.  A fun evening of music and trivia featuring the three Blackheath choirs – Phoenix Choir, The Heathens and Vocal Edge with a special guest appearance from Canon Fodder.  Phillips Hall BLACKHEATH

In our first collaboration with Allegri Singers from Bathurst, we performed two concerts of Passiontide music for the week leading up to Easter. The program opened with the first chorus from Bach’s St Matthew Passion. This work, written for eight parts, is heard only on the rare occasions when a double choir is available.

For our concerts the haunting Ripieno, written for solo soprano, was sung by a carefully selected ensemble of

local schoolchildren – senior students from Blackheath Public School for the Leura concert and the Mitchell Young Voices choir in Bathurst.

The program also included a selection of popular choruses from Handel’s Messiah, Mendelssohn’s Elijah and Stainer’s Crucifixion, and solos from Blackheath tenor Rob Smith and Katoomba mezzo-soprano Lyn Phillips, who sang the famous aria “He was despised” from Handel’s Messiah.

CAROLS AT THE SHOPS 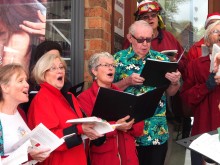 Our annual street carols to raise money for the RFS 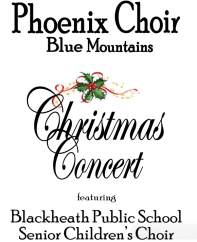 THE GREAT WAR – IN MEMORIAM 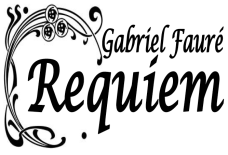 When asked to nominate their favourite choral music, most people include Gabriel Fauré’s Requiem towards the top of their list. This work of exquisite simplicity and beauty transcends the sorrow of mourning with the hope of eternal peace, and is beloved by singers and audiences around the world. Joining the choir for the three performances were several guest choristers from the mountains and beyond. Accompanied by professional musicians, we sang a new arrangement of the work by the choir’s Musical Director, Rowen Fox, with an unusual combination of viola, cello, piano and organ to bring out the rich colours and textures of Fauré’s much-loved work.

Phillips; Léon Boëllmann’s spectacular Suite Gothique for organ, played by Tim Kaye, former organ scholar at Wadham College, Oxford; and what must be one of the most universally loved final-year assignments by a student of musical composition, Cantique de Jean Racine, composed by Fauré when he was just 19 years old.

In this program of pastoral music, the choir performed with a string quartet featuring the members of the acclaimed Three Piece Suite.

The program included madrigals by Morley and Gibbons, and selections from the operas Dido and Aeneas (Purcell) and Orpheo ed Euridice (Gluck). The audience were also treated to two premier performances by of works by Musical Director Rowen Fox: choral arrangements of two of Edward Elgar’s Sea Pictures, and a suite from his opera Chang’E and the Moon, which opera draws on the Chinese legend of Chang’E, Goddess of the Moon, on the night of the Mid-Autumn Festival. 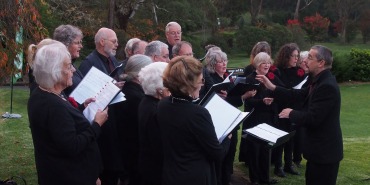 CAROLS AT THE SHOPS

Our annual street carols to raise money for the RFS

A selection of Christmas songs and carols

Handel’s oratorio was first performed at Covent Garden in 1736.

The text is based on the poem by John Dryden, the first English Poet Laureate – Alexander’s Feast or The Power of Music, an Ode in Honour of St Cecilia’s Day: 1697. The story tells of the feast celebrating the victory by Alexander the Great over Darius, Emperor of Persia.

Phoenix Choir were joined by the Leura Singers, and accompanied by the Orpheus Strings orchestra.