Our July 2022 concert was the debut performance for Amy Moore, our new musical director. Amy is better known to audiences as a leading lyrical Soprano soloist, performing as a principal soloist with The Song Company and other vocal con sorts and alongside prominent orchestras. She is also artistic director of CASTALIA Vocal Consort, which performs music from the Renaissance to Contemporary Avant Garde.

Amy’s natural talent for musical direction and conducting was evident in a lively and emotional performance of a rich Romantic program of choral music.

The centerpiece of our concert was Schubert’s delightful G major mass, an early work in the late classical style of Mozart with hints at Schubert’s future Romanticism. The mass was written in just 6 days in 1815, one of Schubert’s most prolific years when, while working full-time as a school teacher, the eighteen-year-old composer completed his second and third symphonies, two Masses, a string quartet, two piano sonatas, four Singspiele, and 145 songs (including the Erlkönig), among other works. 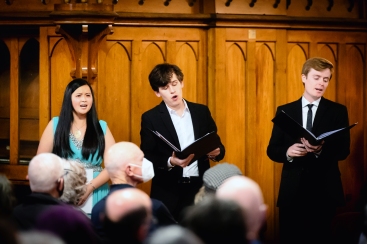 For the Schubert Mass the choir was joined by soloists Ria Andriani (Soprano), Louis Hurley (Tenor) and Brendan McRae (Baritone). We are particularly grateful to Ria to stepped in at the last moment to fill a Covid absence, and to our tenor, Ruth, who drove to Sydney and back to collect Ria after her Sunday morning performance at Christchurch St Laurence.

To accompany the Schubert Mass Phoenix Choir musical director, Amy Moore, curated a complementary selection of short Romantic pieces performed by the choir, soloists and the Kanimbla quartet. This eclectic program reached across the Romantic era from Schubert, Brahms, Mendelssohn and Grieg to Saint-Saens, Stanford and Sullivan.