By Tim Kaye on December 11, 2015
Video and photography by Carolyn Hide, cazeilcreative.com.au 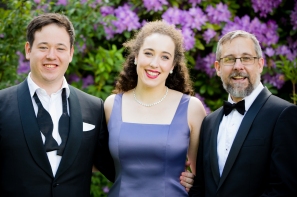 Elijah is undoubtedly one of the most outstanding choral works of the early Romantic era, although appreciation of it has waxed and waned over the years. This is a work I have been wanting to introduce to the choir ever since I took on its direction in 2012. It is also, incidentally, one of the first pieces I ever sang in with my undergraduate university choir and is therefore in no small part responsible for my lifelong obsession with choirs and choral music. It remains one of my all-time favourite works. Choral societies were incredibly popular in early Victorian Great Britain, where the oratorios of Handel (most notably Messiah) had never gone out of favour. When Mendelssohn was commissioned to compose a new oratorio by the Birmingham Festival, in 1845, he was living in Germany, where he was an almost lone voice championing the oratorios of Bach and Handel. So he was ideally suited to give the British singers more of what they loved. He responded with a work deeply influenced by the two great masters. His score combines the form and spirit of the earlier Baroque works with a new Romantic expressiveness and lyricism. After its first performance Elijah received unanimous and immediate acclamation as the first worthy successor to Messiah. To the Victorians, Elijah and Messiah stood for many years as the two unassailable classics of the genre.

Today’s presentation is of necessity a greatly shortened version of the original. I have trimmed some of the scenes and cut many of the solo movements, focusing instead on the narrative arc as told through the exquisite choruses and Elijah’s stirring solo arias. Our accompanying instrumentation of piano, cello and organ is a response to multiple needs: the cello was suggested by the beautiful part for solo cello which accompanies Elijah’s most famous aria, ‘It is enough’, in the orchestral version. The organ supports the singers and underscores the many moments of great religious fervour. I arranged a new version of the overture, seeking an interplay of the three instruments. The rest of the performance arrangement has been prepared from existing parts in close collaboration with organist and choir president Tim Kaye, who created his own organ arrangement for this performance.